Alzheimer’s is the most common cause of dementia, a general term for memory loss and other cognitive abilities serious enough to interfere with daily life. Alzheimer’s disease accounts for 60-80% of dementia cases. A physiological consequence (and perhaps causative factor) of AD is the disruption of the circadian clock, the 24-hour endogenous rhythm that tunes physiology to the day/night cycle.

The circadian system is comprised of a core set of clock proteins that anticipate the day/night cycle by causing daily oscillations in the levels of enzymes and hormones, ultimately affecting physiological parameters such as body temperature and the immune response. Disruption of the circadian system is increasingly associated with diseases like diabetes, cancer, and Alzheimer’s.

The brain’s ability to clear a protein closely linked to Alzheimer’s disease is tied to our circadian cycle, according to research published today in PLOS Genetics. The research underscores the importance of healthy sleep habits in preventing the protein Amyloid-Beta 42 (AB42) from forming clumps in the brain, and opens a path to potential Alzheimer’s therapies. Circadian regulation of immune cells plays a role in the intricate relationship between the circadian clock and Alzheimer’s disease.  This tells us a healthy sleep pattern might be important to alleviate some of the symptoms in Alzheimer’s disease, and this beneficial effect might be imparted by an immune cell type called macrophages/microglia.

The research was conducted at the Rensselaer Center for Biotechnology and Interdisciplinary Studies, which has a focus on neurodegenerative disease. Dr. Jennifer Hurley, an expert in circadian rhythms, and associate professor of biological science at Rensselaer Polytechnic Institute worked with Rensselaer professors Robert Linhardt, a glycans expert and inventor of synthetic heparin, and Chunyu Wang, whose ongoing research has detailed several mechanisms in the production and spread of proteins implicated in Alzheimer’s. The research reveals a new mechanism and path to treatment of neurodegenerative diseases like Alzheimer’s through an interdisciplinary approach, and is emblematic of the CBIS strength in research and discovery and provides a new angle to human health and well-being.

A telltale sign of Alzheimer’s disease is plaques, extracellular clumps of AB42 in the brain. Microglia which are immune cells that seek and destroy unwanted material, clear AB42 from the brain by ingesting it in a process called phagocytosis. In earlier research, Dr. Hurley and collaborators at the Royal College of Surgeons in Ireland investigated circadian control of macrophages, amassing an exhaustive dataset that made it possible to see which macrophage RNA and proteins oscillate with a circadian rhythm. The researchers noticed oscillations in enzymes that help to make two proteins on the macrophage cell surface—heparan sulfate proteoglycan and chondroitin sulfate proteoglycan– both of which are known to play a role in regulating clearance of AB42. 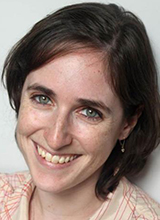 Dr. Jennifer Hurley received her B.S. from Juniata College in 2004 in molecular biology. She did her Ph.D. at Rutgers/UMDNJ with Drs. Nancy Woychik and Masayori Inouye, studying the function of Toxin-Antitoxin modules in bacteria. She was recognized by the American Society for Biochemistry and Molecular Biology for excellence in research for her study of the HigBA toxin-antitoxin module. Jennifer did her Postdoctoral fellowship at the Geisel School of Medicine at Dartmouth with Drs. Jay Dunlap and Jennifer Loros, investigating the relationship between the core proteins and the output of the circadian clock in Neurospora. Her Fellowship was funded by the Ruth Kirschstein National Research Service Award from the National Institute of General Medical Sciences and she received a Perkins award for her contributions to Neurospora research. Dr. Hurley joined the Department of Biological Sciences at Rensselaer Polytechnic Institute in 2015. Dr. Hurley’s research focus is on the fundamental mechanisms underlying circadian rhythms. Circadian rhythms are an important component in understanding how organisms function within the photoperiodic world that we live in; defects in the circadian clock or disruptions in circadian rhythms are linked to a wide range of sleep, metabolic and psychological disorders in humans. Her lab investigates the relationship between the core clock mechanism and the output that the clock controls using a combination of molecular genetics and biochemical techniques as well as a biostatistical/computational approach using whole genome scale data. Her lab has been awarded the Society for Research on Biological Rhythms Junior Faculty Research Award as well as the Rensselaer School of Science Junior Faculty Research Award.