Human epidermal growth factor receptor 2 (HER2) is a member of the epidermal growth factor receptor family having tyrosine kinase activity. Dimerization of the receptor results in the autophosphorylation of tyrosine residues within the cytoplasmic domain of the receptors and initiates a variety of signaling pathways leading to cell proliferation and tumorigenesis. Amplification or overexpression of HER2 occurs in approximately 15–30% of breast cancers and 10–30% of gastric/gastroesophageal cancers and serves as a prognostic and predictive biomarker. HER2 overexpression has also been seen in other cancers like ovary, endometrium, bladder, lung, colon, and head and neck. The introduction of HER2 directed therapies has dramatically influenced the outcome of patients with HER2 positive breast and gastric/gastroesophageal cancers

The anti‐HER2 antibody binds specifically to HER2‐positive cells to stop the downstream transduction of signal resulting in cancer cell death. The Quenchbody (Q‐body) immunoassay is a new technology of biosensing that makes use of fluorescence quenching of the conjugated dye by residues of intrinsic tryptophan in the antibody’s variable region. The Q-body assay does not require any supplementary steps or reagents to carry out detection and it is simple when compared to the conventional fluoroimmunoassays. Q‐body made of antibody Fab fragment (Ultra Q‐body [UQ‐body]) has been found to give a greater antigen-dependent signal, and to be more stable than the corresponding single‐chain Fv-based Q‐body. There has been successful development of UQ‐bodies for the detection of large proteins like influenza virus hemagglutinin as well as small molecules like peptides.

In a recent research paper published in the Journal Biotechnology and Bioengineering,  researchers from Tokyo Institute of Technology: Professor Jinhua Dong (also affiliated at Weifang Medical University), Yuya Oka, Yuki Ohmuro‐Matsuyama and Professor Hiroshi Ueda together with Dr. Hee‐Jin Jeong at Hongik University developed new UQ-bodies that detect HER2 and explored their use in detecting cancer cells that are HER2 positive. Moreover, they also showed that the developed UQ-bodies were successful in delivering therapeutic molecules that effectively killed HER2-positive cancer cells.

The research team used expression in E. coli, recombinant DNA technology and labeling with candidate dyes to create Fab37 fragments that had N‐terminal Cys tag for dye‐labeling at the heavy or light chain. The result was a highly responsive UQ-body.

More specifically, they developed two expression vectors for the tagged Fab37 both of which showed targeted binding to the HER2 antigen. Afterward, they labeled the L-Fab and H-Fab with ATTO520‐maleimide and TAMRA‐C6‐maleimide respectively and observed that the labeling did not decrease the binding activity of the Fab fragments. When examined, the authors observed that the H‐chain labeled UQ‐bodies displayed more specific and higher responses.  Both the fluorescence intensity and the antigen‐dependent fluorescent responses of TAM‐H UQ‐body and ATTO‐H UQ‐body were higher than that of TAM‐L UQ‐body and ATTO‐L UQ‐body.

When used as a bioimaging reagent in three human cancer cell lines with different levels of HER2 expression, the ATTO‐H UQ‐body successfully demonstrated a one-step targeted detection of HER2 positive cells. A consecutive nine arginine (9R) sequence was attached to the C-terminal regions of the ATTO‐H UQ‐body to modify it as a vehicle to deliver siRNA for polo-like kinase, a cytotoxic agent to the cancer cells. It resulted in a depletion of HER2 positive cancer cells.

Indeed, the authors have constructed an excellent tool that is relevant for both diagnosis and therapy in cancers with HER2 cells. They constructed novel UQ‐bodies that can be used for the biological imaging of live cells for cancer diagnosis and for the delivery of cytotoxic agents. 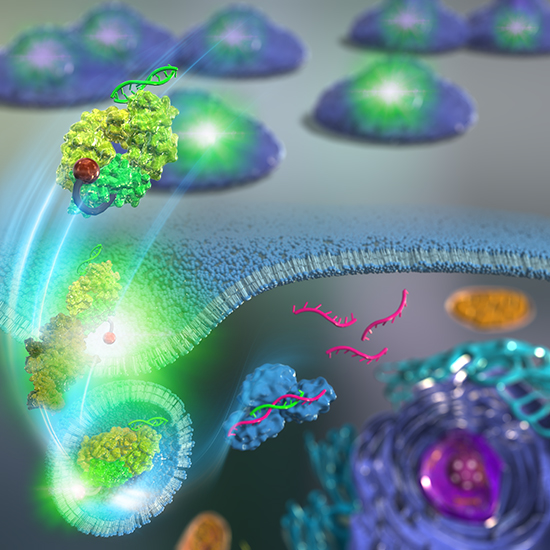 Hiroshi Ueda is a Professor of Laboratory of Chemistry and Life Science, Institute of Innovative Research at Tokyo Institute of Technology, Japan. His research focuses on the protein engineering of antibody and other molecules with the aim of biosensing and diagnostics, and interested in developing novel immunoassay principles, such as Open Sandwich immunoassay and Quenchbody. These methods enable non-competitive and quick detection of small molecules like hormones and toxins, and larger important proteins in diagnostics and therapy. The research disciplines utilized are combinatorial technologies, chemical biology, fluorescence and bioluminescence both in basic and applied aspects. He received Japanese Ramsay Memorial Fellowship for 1997-99, for studying antibody engineering under the guidance of Sir. Dr. Greg Winter in Laboratory of Molecular Biology, Medical Research Council, Cambridge UK, who received Nobel Prize in Chemistry in 2018.

He published more than 160 original papers and has received many awards including Promotion Award and Research Award from the Society of Chemical Engineers in Japan, and Biosensors 2012 Best Paper Award. He is now serving as the president of Biochemical Assay Society of Japan, the vice president of Japanese Society of Enzyme Engineering, Board member of Japan Association of Bioluminescence and Chemiluminescence, and a Councilor of Japanese Biochemical Society.